From the North to the SXSW 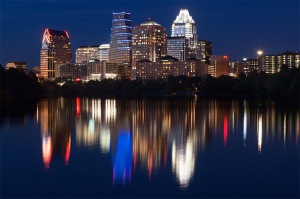 At 11 o’clock this morning my plane touched down in Austin, Texas. For the next eight days I will be sleeping on the floor of a stranger’s studio apartment, hitching shuttles and free rides from place to place and fighting the stifling mugginess that’s already caused me to sweat through one shirt.

And I can’t wait.

Friday marks the beginning of SXSW, a two-week music, film and technology festival in Texas’ capital city. I, along with Andrew Johnson, secured press passes to cover the film portion of the festival for his website, FilmGeekRadio. Over the course of about a week I’ll be screening roughly 25 films, interviewing actors and directors and keeping a finger on the pulse of the major cultural festival. So–PROMO ALERT–be sure to check back often for updates, pics and video.

This trip is my first to the lone star state. As a holier-than-thou New Yorker, I’ve always assumed assumed the worst about Texas. My opinion of the state is, for the most part, based on Bush II, Rick Perry and Walker, Texas Ranger. Sitting in a coffeehouse the past five hours or so, however, I’ve picked up on a few things: 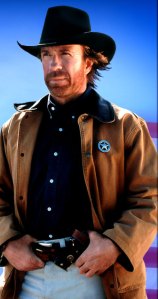 "You can't name a bridge after Chuck Norris, because no one crosses Chuck Norris." -Seth Meyers

Sandals and v-necks in March? It seems there’s an advantage to living in a city not shrouded in snow and ice six months of the year.

They’re not nicer. They’re just more polite. Someone may still tell you to “fuck off,” but they’ll do so with a smile and say thank you when you acquiesce.

3. The government stays out of the way

I’m not talking about immigration law and abortion control. It’s the little things that strike me: Cigarettes are sold in a coffee house, balconies exist without railings and warning signs, and health codes seem more like “guidelines” than rules. Then again, if Rick Perry was in charge of my state, I’d want him doing just about as little as possible too.

4. There are no accents, no cowboy hats and (so far) no tumbleweeds blowing across a deserted town square

I’m still holding out for the latter, but I’ve yet to hear a person under 50 who has a Texas accent. I am, however, still adjusting to “y’all.”

5. Nowhere are there screen doors

Granted, I’ve only visited a few places thus far, but the coffee shop in which I’m currently writing has the doors wide open and there’s a cool breeze blowing through here. Yeah, there are bugs everywhere, but like I mentioned earlier, health codes seem more like a loose set of recommendations. Personally, I’m fine with it.

So congrats, Texas, you’ve made a hell of a first impression. Let’s hope you continue to surprise and impress.

← Written in the stars
Fear and Loathing at SXSW →